The system diagram for the Cetaceans module is very similar to the system diagram for almost any eurorack synthesizer module. The module is only one small part of a larger system, represented in this drawing by the label [User/Musician]. They will connect this module to the others in their system. The big difference is the ESP chip, which connects to the Wifi (at the moment only my home network) and makes inquiries of the API maintained by the International Oceanographic Commission. 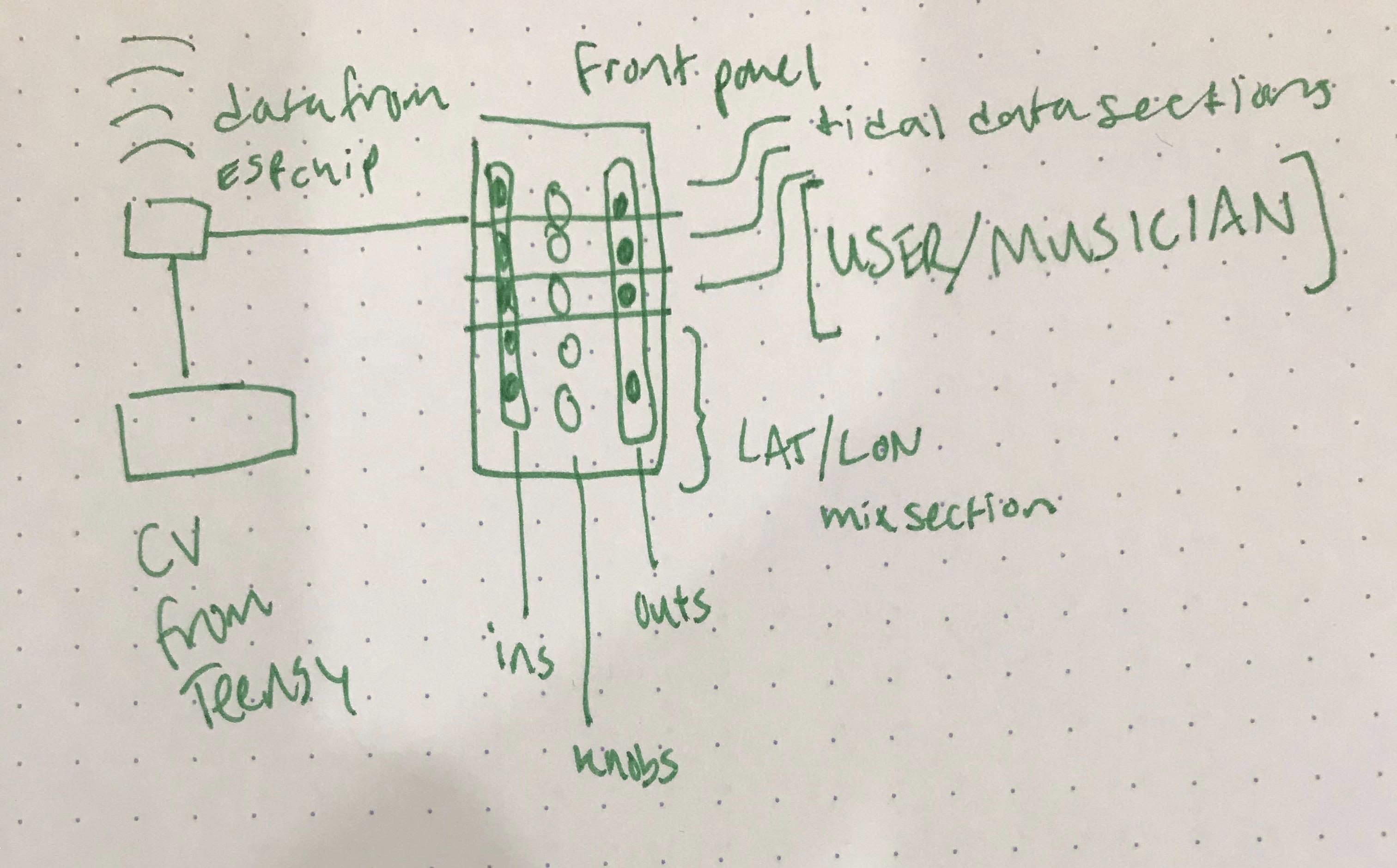 This general outline for the module, with its three tides and two mixing channels, turned into this schematic.

The build is mostly SMD parts and all the SMD parts are 0603. The inductor, diodes and larrger parts are through-hole. Usually I buy parts with a 50V rating and 1% tolerance but given the less precise elements of this project I wouldn’t sweat it.

Most of these parts I have—and the ones I don’t don’t really have reliable price estimates, they tend to change pretty frequently based on availability and what specs you’re able to get. My guess is that the total will come to about $50-70 without the larger parts (knobs, jacks, the $20 Teensy, and the $10 breakout board). 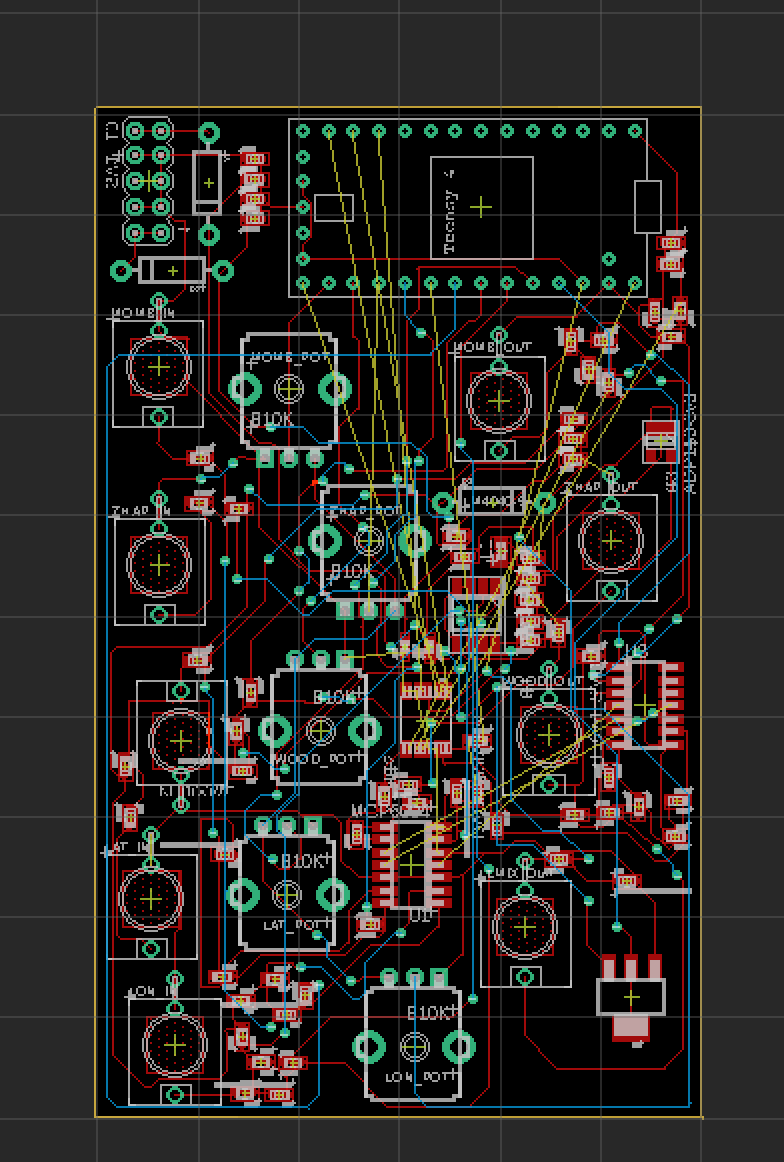 In general, the best approach for builds like these is to start with the smallest SMD parts. I tend to start with the resistors, capacitors, and then the integrated circuits. After that, the through-hole parts, starting with the small inductor and diodes first and working up towards the larger stuff. The jacks and knobs will absolutely get in your way if you don’t save them for last. If you solder them to the board without making sure all the software programming works first, it’s going to be really frustrating trying to unsolder them for reuse in your next attempt.

Ideally, the next steps of the assembly process would involve attaching a decorative aluminum plate to the front of the panel and screwing nuts around all of the jacks and potentiometers. And then plugging it in and screwing it into your synthesizer rack.

Where are we now?

I took on a project that was a lot bigger than I expected. I spent a lot of time working on the PCB and trying to route the significant number of parts I was dealing with. I got pretty far in before I realized how disorganized the sections of the PCB were. I used a ton of vias to get everything routed successfully, to the point where it looks like it’ll be tough not to bridge them when working nearby.

I think when I do it again, I plan to section off the different elements of the board before starting to route. I thought I was staying organized, but the size of the board made it more difficult. I think switching back and forth from schematic to layout might help. 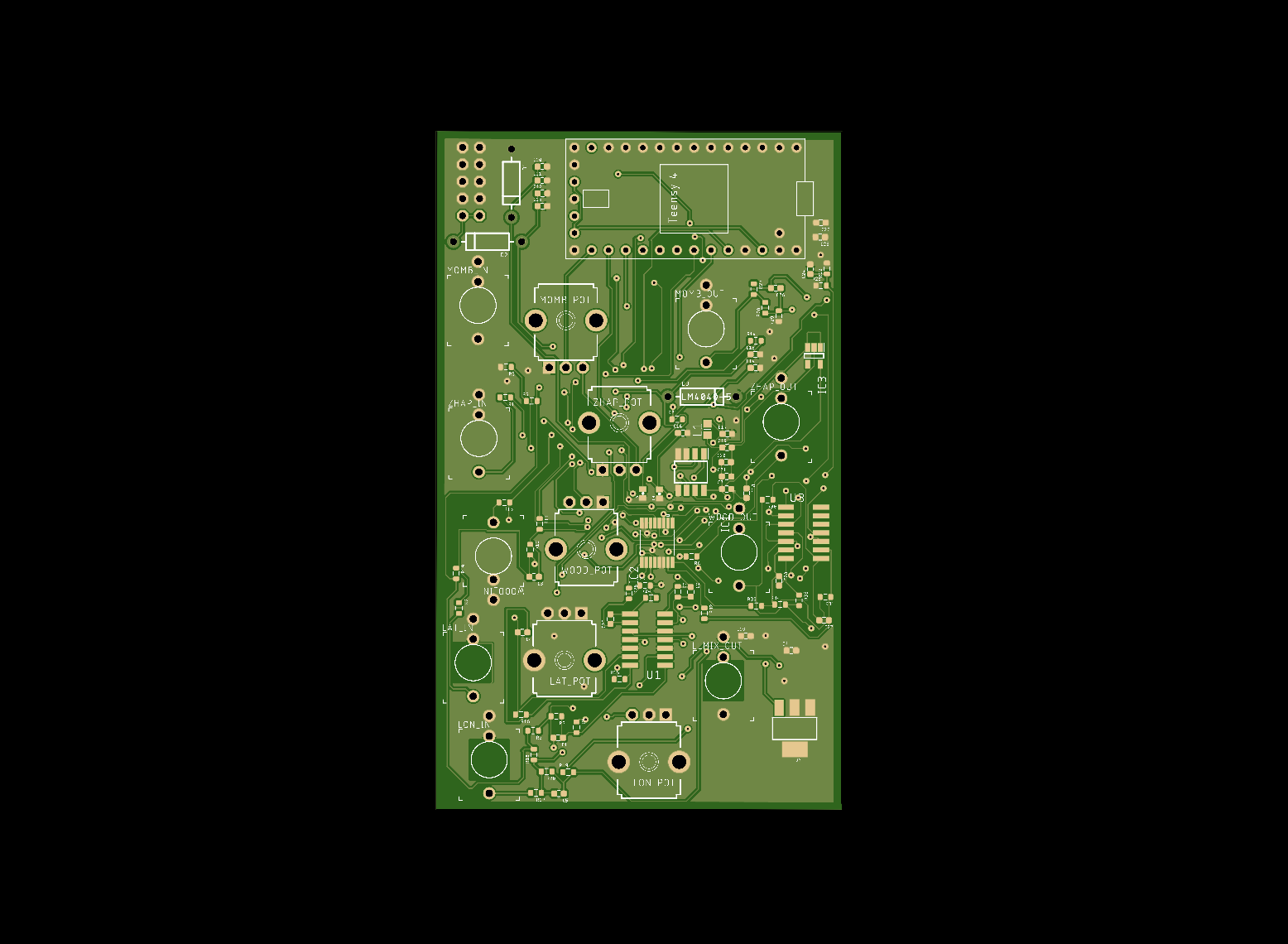 Plus I forgot that I need space for the ESP8266.

Prototyping has been an exercise in missing the target and reattempting, and I expect this iteration to continue when I receive my boards and then after that, too.

My next immediate step is to fully solder one of these new boards (along with a breadboard or perfboard with the ESP8266 mounted on it) to see if I can get the API data I can reliably pull down to turn into voltages in the ranges I expect and over the periods I want.