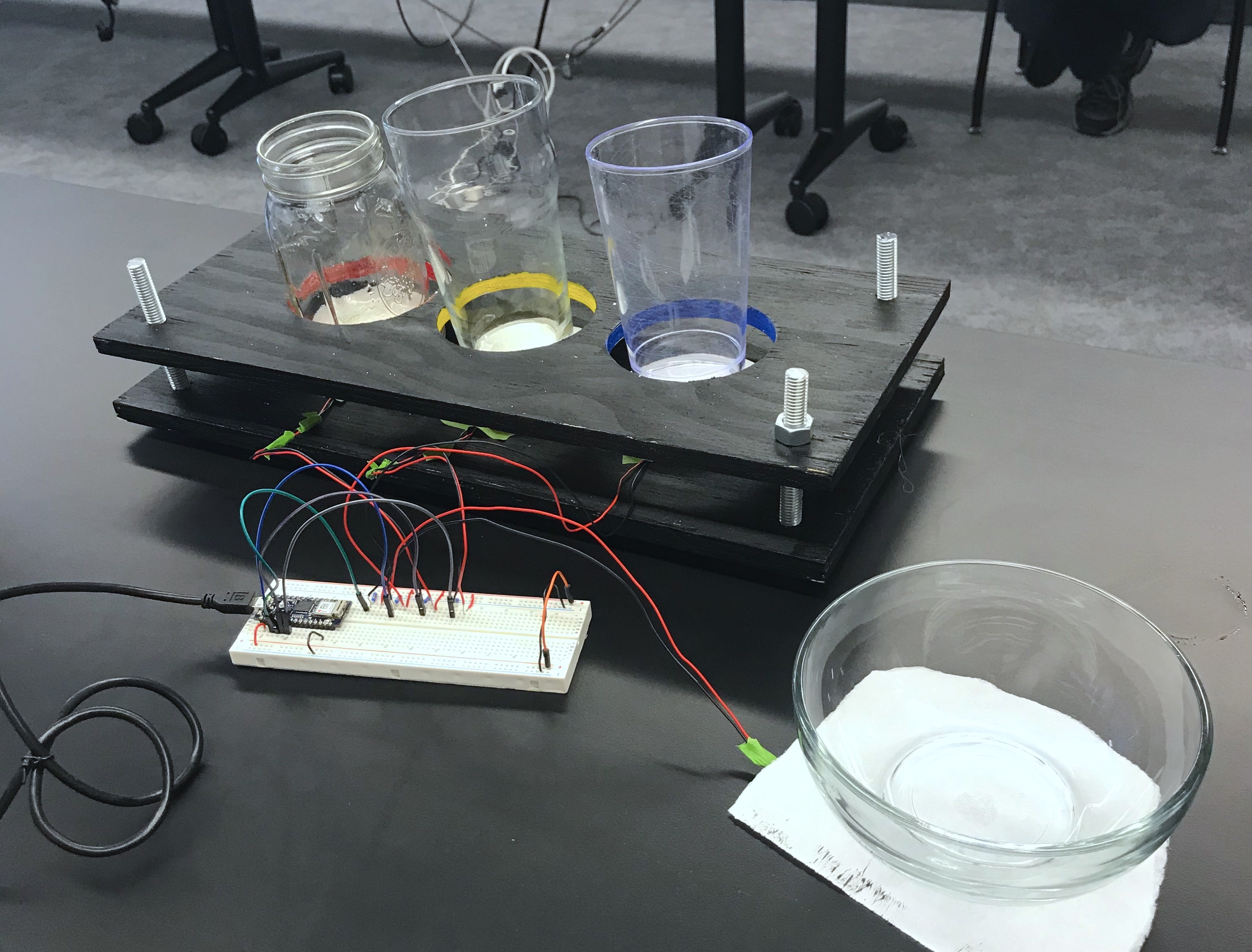 Nikhil Kumar and I made a granular wavetable instrument—a liquid-based interface for scrubbing through recorded audio in a semi-musical way. It consists of a pitcher of water, three partially-filled glasses, and one bowl. The glasses and bowl are set on top of force-sensing resistors and the whole setup is attached to a p5.js sketch with Tone.js for audio. By pouring the water between the different containers, the musician can move through an audio file, move through a bank of audio files, and accompany the audio with a shifting drone of chords.

How’d We Get Here

After the ITP40 event, the floor is still staged with pieces and projects by past students. One of them is Pr. Yeseul Song’s piece Illuminated Path, which is simple and immediately charming: you walk into the room and a lightbulb overhead follows you. With the looping mechanical belt, I started thinking about tape pieces by Marcus Fischer…

Nikhil and I paired up to talk about building some kind of MIDI controller for the PComp midterm, but the project concept quickly went through a few different phases.

We started out trying to use load cells for a pretty precise set of measurements. We wanted the moment-to-moment pouring of liquid to immediately give the user a sense that they were pouring through the audio. Load cells, it turns out, don’t work like we thought: you really do need four per platform, and configuring them to work together can be tough. When the load cells finally showed up on Monday, we had less than 48 hours to finish the project. After hours of struggling to get them to work and a trip to MicroCenter to pick up amplifier ICs, we abandoned the load cells and replaced them with force-sensing resistors. A bead of hot glue under the wood platforms lets the water press mostly on the resistors, but it’s not perfect. 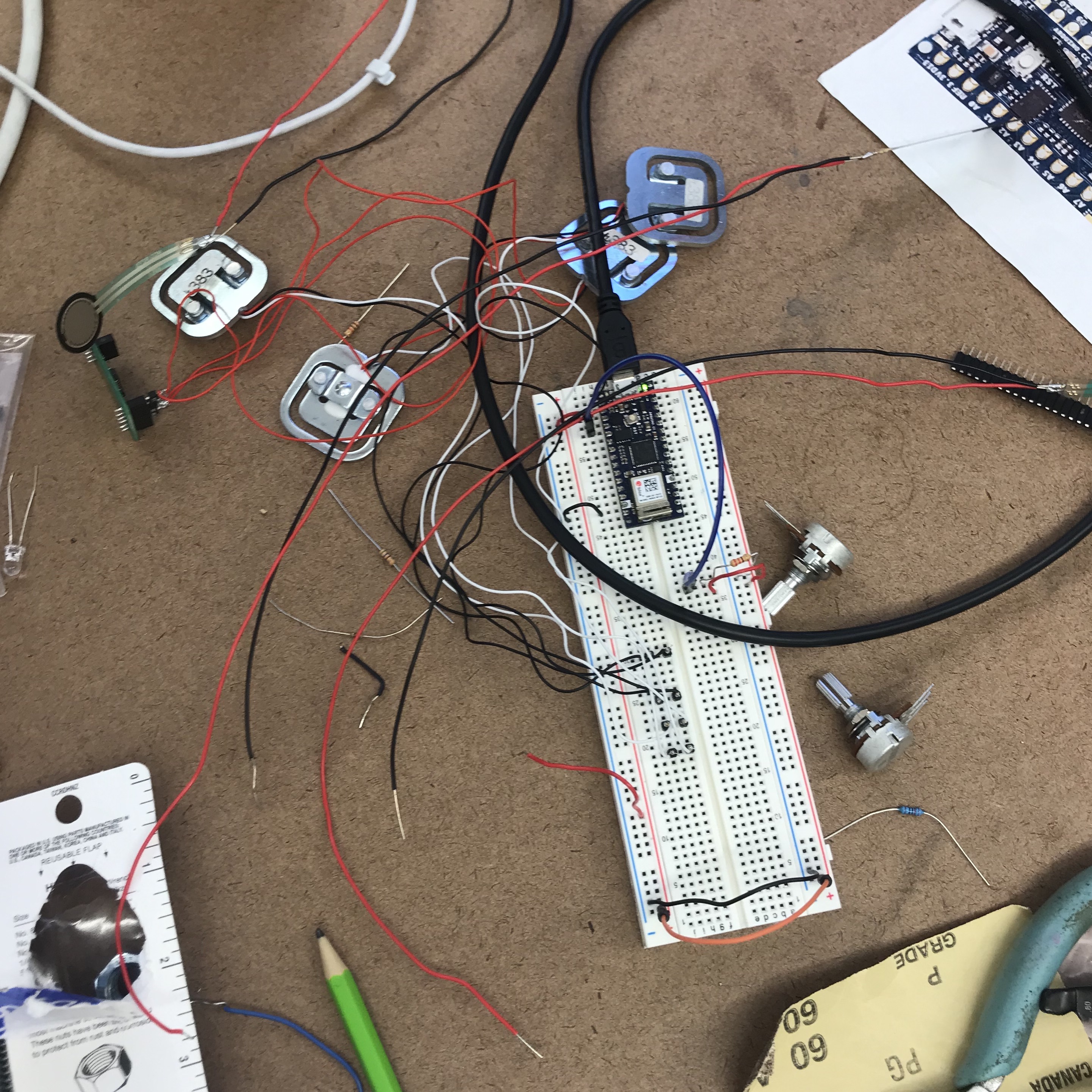 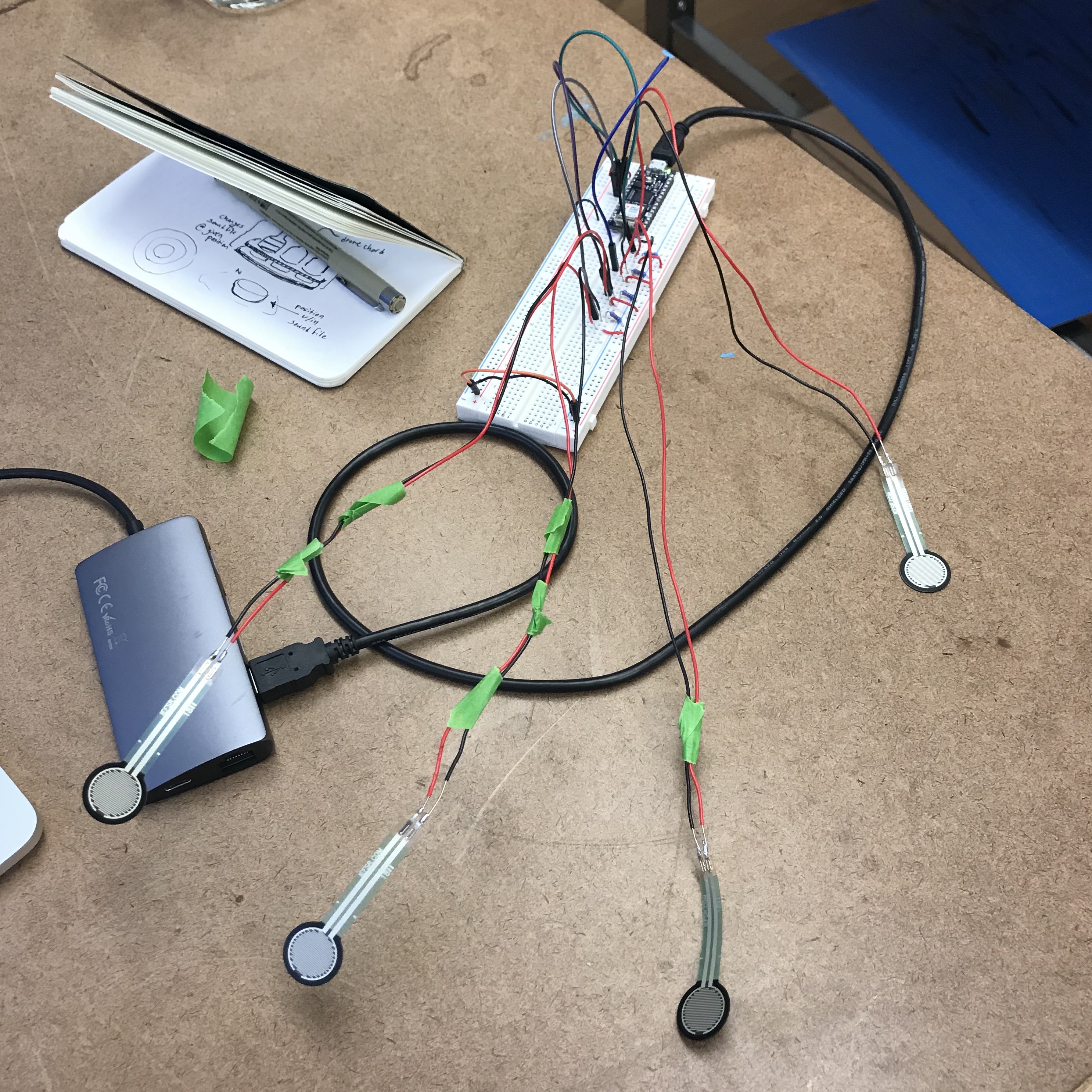 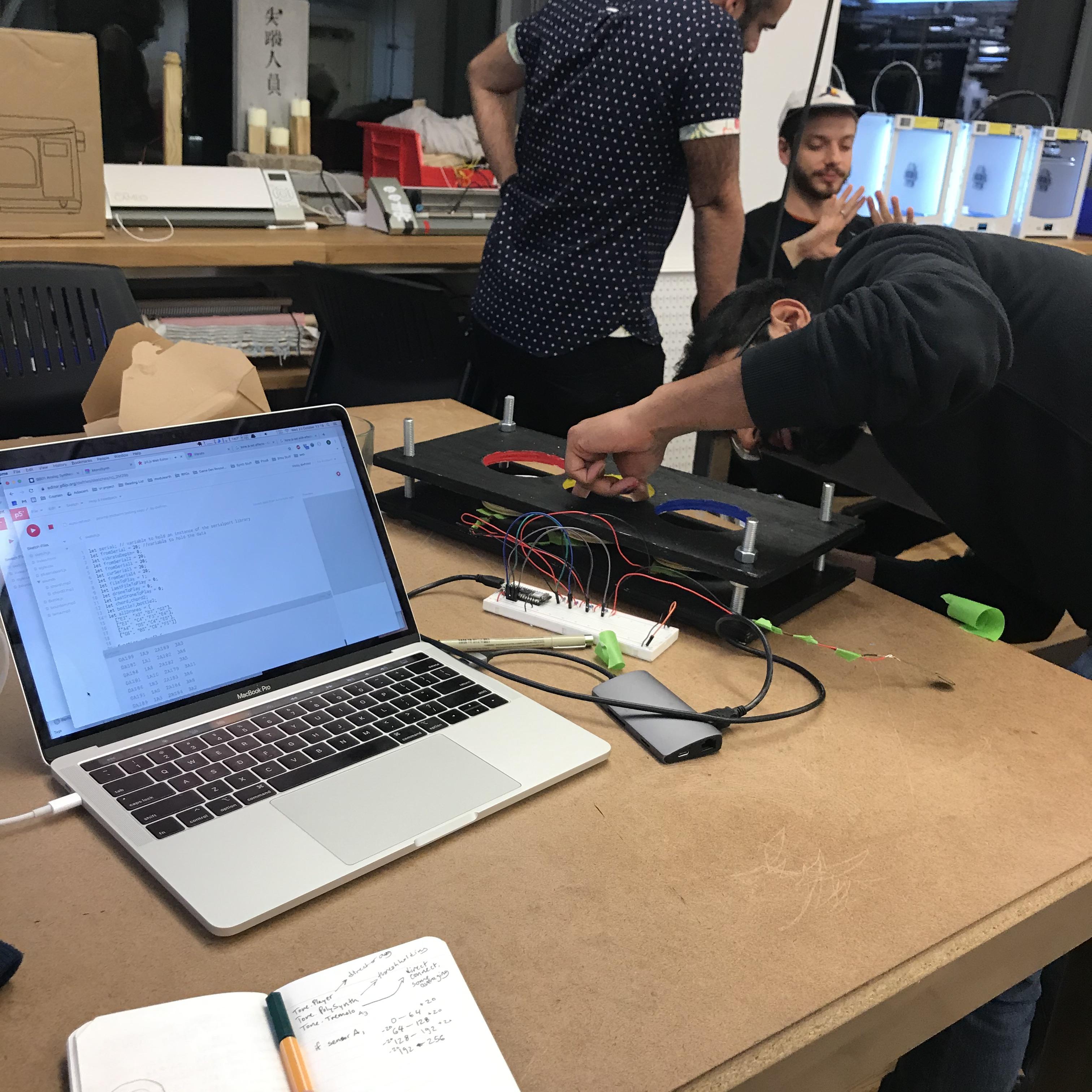 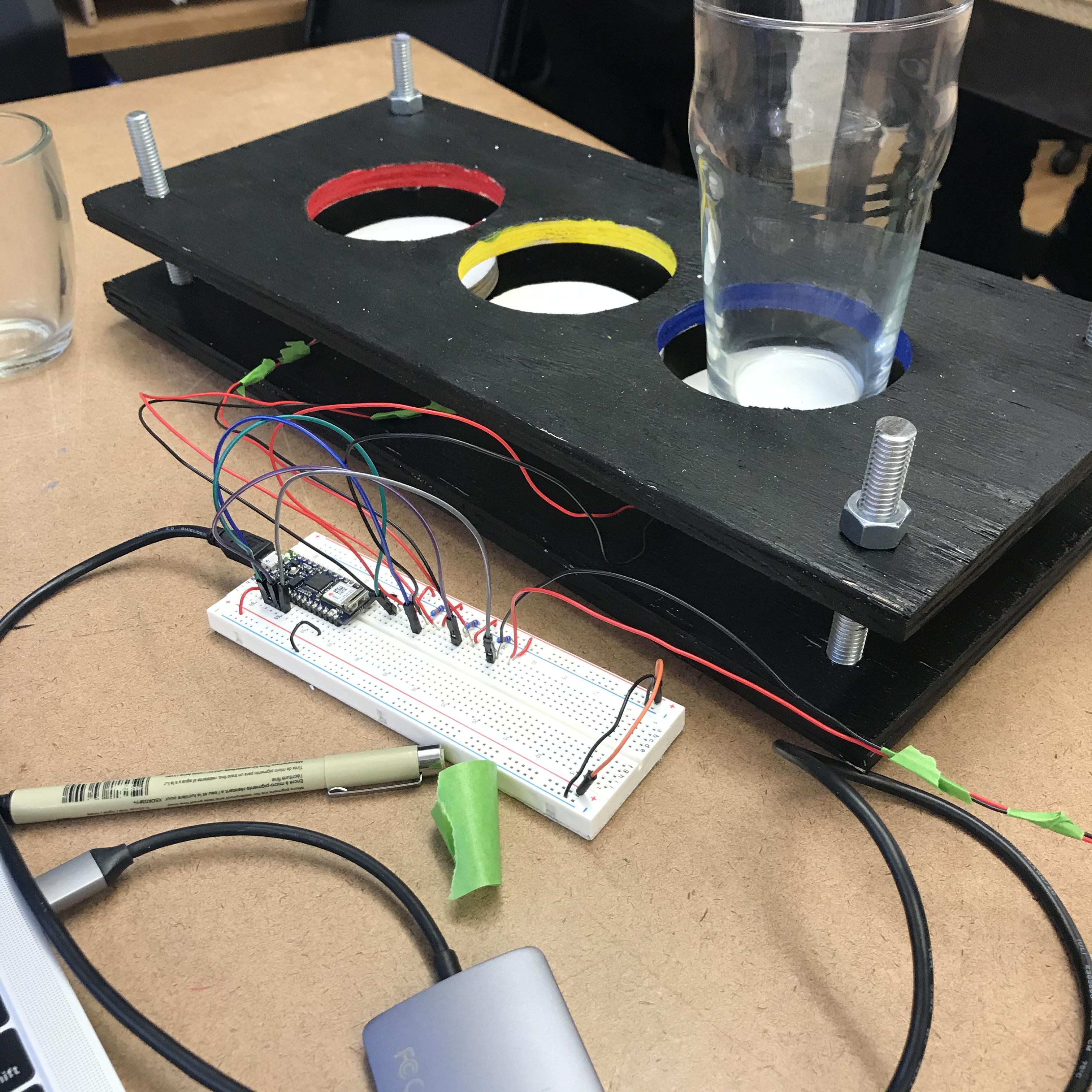 The class presentation of the instrument went okay. The values in our sketch were tuned to the testing we had done, holding the resistors with our fingers and pressing to control the audio. In performance, the platforms plus the water produced sort of a different curve of values and the results sounded pretty different—less precise.

Use the components you have.

Our project was based on the load cells, which we did not have and had not used when we started out. Most of our time was spent trying to figure out how best to use them how we wanted, and when we switched to the FSRs, progress moved way more quickly.

Being pressed for time, most of our testing was done directly with the FSRs and not with the water we planned to use in class. Although nothing really went wrong, testing with the water would have allowed us to tweak values for a more dynamic final performance.

The precision of load cells would improve the project!

I still think load cells are the right choice for this project! I think the precision they afford is part of what was missing from the final presentation. On the other hand, several sets of load cells and amps costs a lot more than four FSRs.