Zeyao and I started by thinking about the walk we developed, and how the game turned out to be in hiding one’s leading or following, and less in trying to negotiate with one’s collaborator. We wanted to create a follow-up that forced collaboration and silent conversation at a deeper level. After a little bit, we started thinking about unconscious activity. Because everyone’s lung capacity is different, because everyone develops different habits, it is difficult to sync our breathing with someone else. 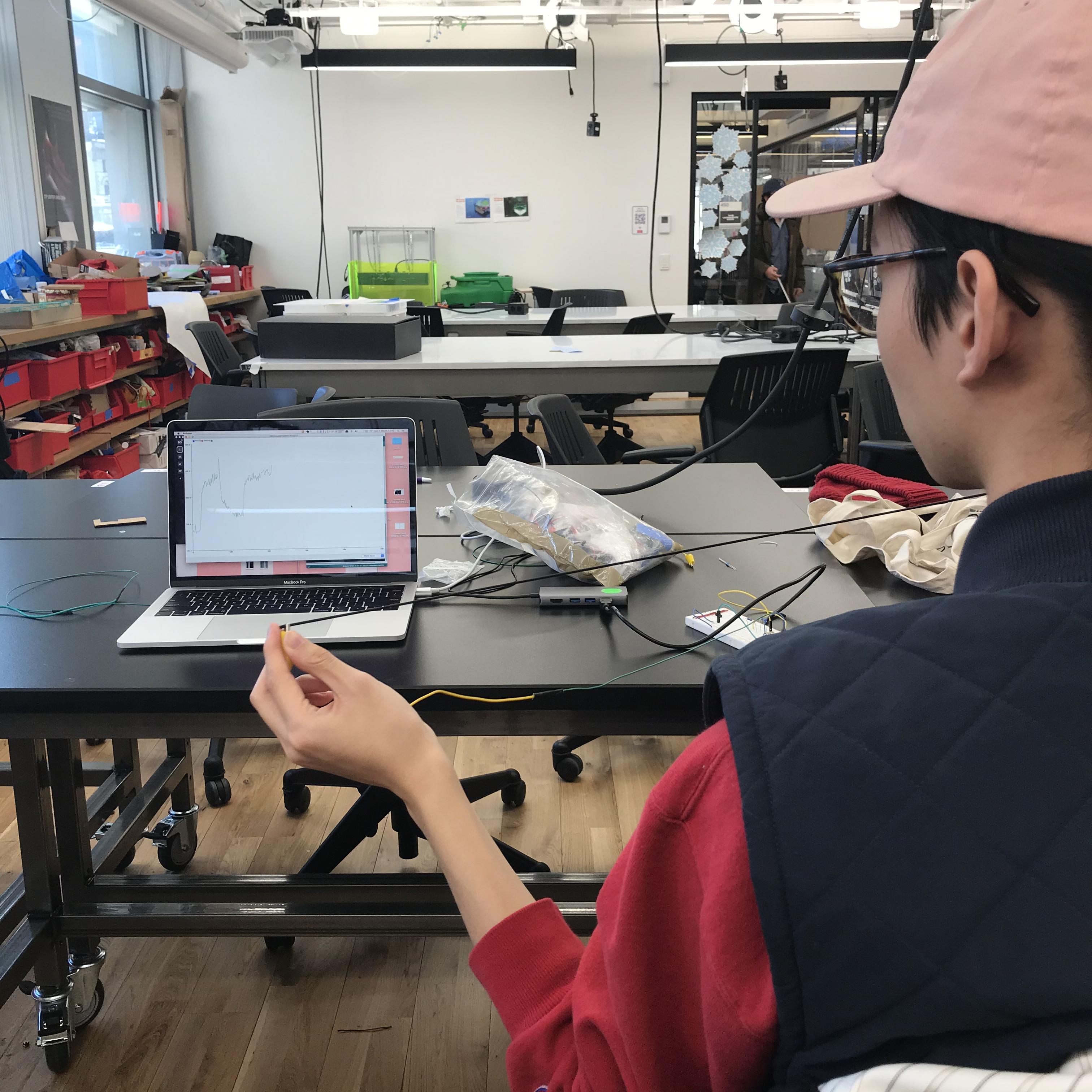 In addition, the intimacy is compelling. Constraining one’s breath is difficult and in this case it also requires thinking quite deeply about another’s body and the rhythm of their breathing. Zeyao and I tried matching our breathing without otherwise communicating and found it difficult, but possible.

Our next steps seemed obvious: in order to quantitatively measure a person’s breath, we should use a stretch sensor. So we prototyped over the weekend with an arduino and some borrowed stretch sensors until we got consistent readings.

After discussing our project with Mimi and in an effort to maximize our opportunities for user-testing, we elected to pivot. We wanted to maintain the intimacy and difficulty of partner-breathing, but needed to figure out a way to get breath data with just a phone. I sat with my phone on the floor of a phone booth, and wrote a sketch that raised and lowered a ball as the phone tilted. I put the phone on my chest and breathed deeply. The angle of the phone was a solid representation of how full my lungs were.

Because everyone’s chest and lung capacity are different, I added a calibration process that would ensure two players were trying to match how full their lungs were, not the angle of their phones.

As described on the project site, our rules were: 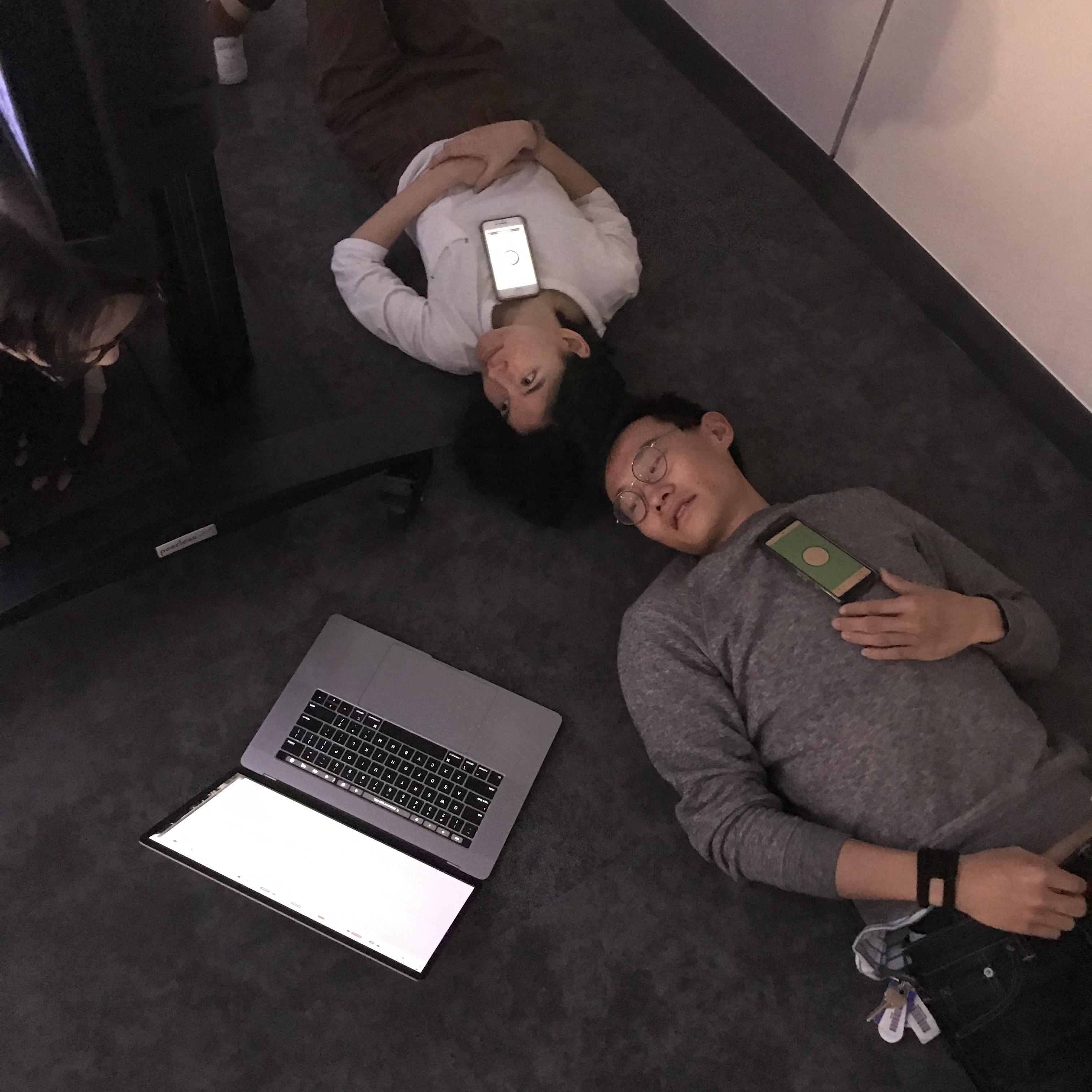 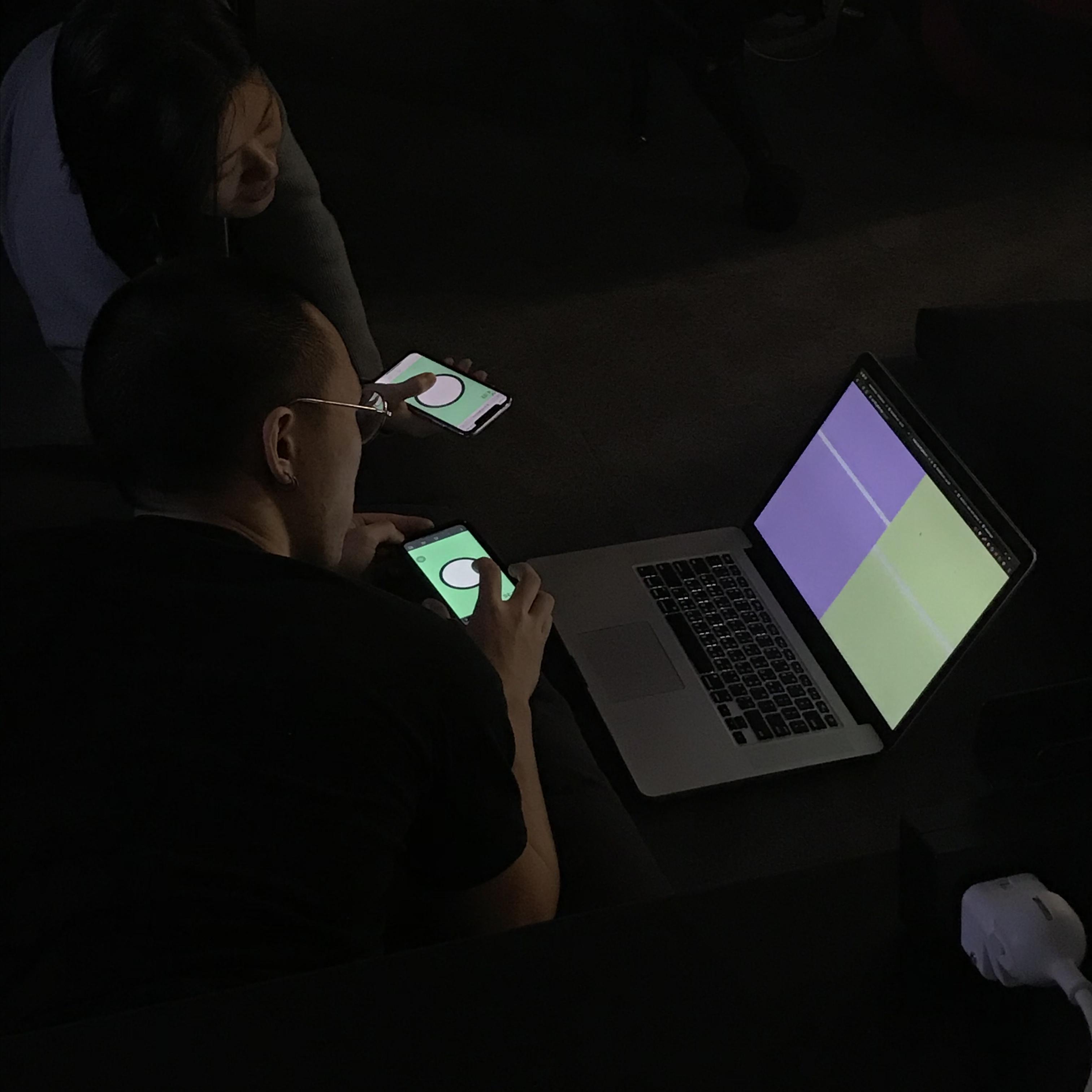 In-class testing went moderately well. Ultimately, I think our calibration process was too complicated and our rules were too precise. Many of our testing classmates had their phones the other way around, and many had calibrated themselves strangely and couldn’t tell because they weren’t really allowed to look at their phones. Plus the audio feedback window is incredibly small. An easier process would have allowed people to tweak their breathing a little more carefully. Plus, lying head-to-head made it tough to feel how your partner was breathing, different from our initial back-to-back tests, and some people were breathing with their diaphragms rather than their chests. These may all be fixable issues but the combination made it difficult for anyone to really achieve sync.

I hope to revisit this project. I think there’s something to the idea. I wonder if maybe I can hang a phone from someone’s neck on a lanyard or if there’s another way to guarantee better breath feedback over sockets regardless of someone’s breathing styles or patterns. On the other hand, the process of breathing with someone else is intimate and elucidating on its own—all without web-sockets.