I made a “font” that only writes poems. I’ve been looking at the ConLang community on Reddit and there’s a pretty in-depth tutorial on how to use Inkscape and FontForge to make your own font for your own constructed language that I do want to experiment with. However here is a p5 sketch that allows keypresses (and backspaces) to write poem-like constructions.

As I write this I’m thinking a lot about how fast I’m able to do it–my touch-typing is pretty good actually, I’m very familiar with where all the keys are and what they mean. With this pseudo-font, that process is totally broken. It would probably take me longer to write one of these poems on purpose with the pseudo-font than it would for me to type it out longhand.

Each keypress adds a new character-phrase to the poem, moving down the page. Each space starts a new poem adjacent to the first. Each keypress-character has a phrase according to its position: initial, medial, or final; as well as (for the medial and final options) a variant depending on whether it is in an even or odd-numbered position.

Initially, I was writing each character almost as its own poem, attempting to follow somewhat the same format in terms of tone and grammar, so that phrases could be swapped out comfortably:

But eventually I started trying to make each character have some topical coherence. Z is all about ending, R is all about things that are red, and so forth: 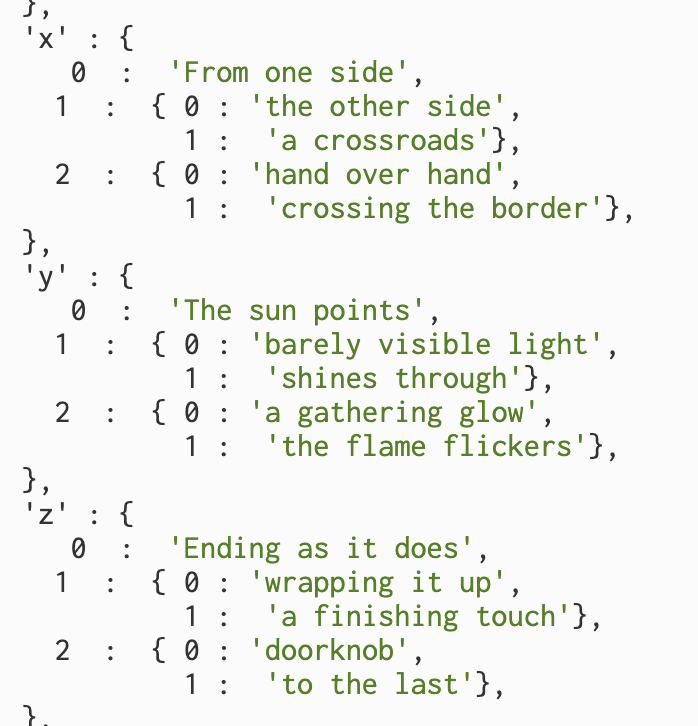 Some examples of output: